Around the World in 80 Careers: Chartered Accountant 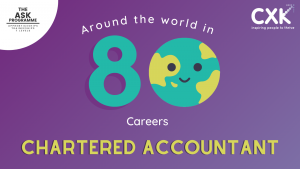 Our traveller felt fatigued this morning. New York City had been a pacey leg of the trip, particularly over recent days. Busy daytime sightseeing had been coupled with world-renowned night-time entertainment. The basketball had lived up to expectations. Putting injury problems behind him, Kevin Durant led the Nets to rally from 21 points down to storm past the Knicks 110-98 – thanks in no small part to the physios that facilitated Durant’s rehab.

The following night, our traveller had watched Billy Joel perform live at Madison Square Garden, opening with “Storm Front” – the first time he had played the song live in 16 years. Then last night, Broadway had been the cultural adventure of choice, enjoying a phenomenal musical performance of Hamilton at the Richard Rodgers Theatre. Our traveller concurred with The Wall Street Journal’s review that it was sensationally potent and theatrically vital; plugged straight into the wall socket of contemporary music.

The latest edition of The Wall Street Journal sat atop the café counter, open on the Markets section. A headline read “Bank Deposits Could Drop for First Time Since World War II.” Time visiting New York City was running out for our traveller, and the headline reminded them that they had still not visited Wall Street. Pancakes eaten, check paid and with renewed energy, our traveller stepped onto the sidewalk and hailed a cab.

“To New York Stock Exchange, please.” Requested the rejuvenated tourist. “Sure thing.” Replied the driver. Our tourist admired the view from the window as the cab toured the Manhattan streets.

“Just visiting, buddy, or is this a work trip?” Asked the driver, sparking up conversation. “Just visiting.” Replied the traveller. “Although, I did work in finance previously. Banking specifically. I’ve always wanted to visit Wall Street.”

Interested, the driver explained, “My daughter works in banking, just along from Wall Street actually. We live in a major financial centre. Good place to be if you’re an accountant or high-level finance exec. She earns the big bucks.”

The taxi journey continued through the morning traffic. “People don’t always know why the city is known as The Big Apple.” Said the cab driver. “New York City wasn’t always as prosperous is it is today. The city hired an advertising firm to boost the reputation of the city for tourists. They really pushed the ‘Big Apple’ nickname, and it stuck. A lot of the world’s money flows through here and the city benefits from it. Like the majority of the sap flowing to the tree’s biggest fruit, you might say. That’s originally where the name came from.”

Whilst continuing the conversation with the driver, our traveller used their phone to look up the National Careers Service website, to find out more about the role of a chartered management accountant. They read that it’s possible to complete a bachelor’s degree in any subject and then apply for a graduate scheme that offers training towards a professional accountancy qualification through CIMA or ACCA. Alternatively, these professional qualifications could be acquired through a Level 7 apprenticeship. Recently, the first cohort of Accounting and Finance T Level students embarked on their journeys, equivalent to three A Levels, which could provide ideal stepping-stones to the university or apprenticeship routes to Chartered Accountant status. The varied routes to chartered status require thorough consideration, so our traveller decided to bookmark the following links to read later:

The traveller looked up from their phone screen for a moment and realised the taxi had already arrived at Wall Street. “This is your stop, pal. That’ll be twelve bucks.” Said the driver. The traveller hovered their card over the reader until it beeped, then the driver wished the traveller farewell. “Thanks, you have a nice day.”

The tourist spent the rest of the day exploring Wall Street and the financial district of Manhattan, ticking off the sights in their Lonely Planet pocket map. They even took a trip to the viewing deck of the One World Observatory to see the famous skyline from 102 stories. They met people from all over the world. One person in particular described how they too had been travelling the world and had just arrived in the USA from Canada, with previous months spent in south-east Asia. “French-speaking Canada is amazing; you have to go.” They had urged. This resonated with our traveller, as Montreal was one of their favoured next options. The Greyhound bus to Montreal Central takes 9 hours from the Port Authority Bus Terminal, the traveller read in the pocket guide. Whilst this seemed like a long journey, it could provide a chance for some much-needed sleep! This felt tempting to the sleep-deprived explorer.

With that, our traveller sought to book a one-way bus ticket to Montreal.

In addition to the links already provided, further reading around apprenticeships leading to Chartered Accountant status can be found here:

Emily had been out of education since Year 7 due to experiencing severe bullying at her school An attempt was made to integrate Emily back into education previously but this fell through – due to these circumstances Emily was left with a negative view of education even though she loves...