Around the world in 80 Careers – Photographer 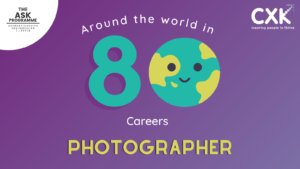 Having enjoyed Laila’s company, our traveller asked if they could travel with Laila who was stopping in Sweden on her way back to France. This was a win-win for both parties. It allowed our traveller to save money as they slowly started to make their way home. On the other hand, Laila was really pleased to have someone to talk to.

As they made their way to Stockholm, Laila decided to drive along the Gulf of Bothnia, and have a stopover around Lake Siljan in Orsa. After a long journey and several stops, they finally arrived at their destination.  In Orsa, they decided to stop and have lunch. Laila told our adventurer that this region was known as “the most Swedish of all regions”. She went on to explain how every summer, in the beginning of July, a week-long series of events and concerts by the name Musik vid Siljan takes place by the lake and attracts a lot of people. She also told him of the great panoramic views of the lake that can be seen from the top of mount Gesunda.

Full of knowledge and interesting facts, Laila added “ as we are in Sweden, did you know that the name IKEA is an acronym comprising the initials of the founder’s name, Ingvar Kamprad, the farm where he grew up, Elmtaryd and his home village, which happens to be called Agunnaryd?”

Our traveller was still in awe. They could not believe the scenery and what they had seen on their journey so far. As they made their way to a local restaurant, Laila asked “as someone who loves travelling, have you ever thought of being a photo-journalist?”, to which our adventurer replied “ I am really interested in photography, maybe it’s a career path I can explore when I am back home”.

In Restaurant Stinsen, both travellers ordered  Gyrta, a common winder dish in Sweden made, similarly to beef stew, with elk or reindeer. As they waited for their food, our travel took his phone out and went on the National Careers Service website.

It’s fair to say that our friends were very disappointed not to spend more time in Orsa, home to one of the biggest ski resorts and wildlife park in Sweden.

Hoping to get a lift all the way back to France,  our traveller hopped back on the lorry with Laila, as they made their way to Stockholm.

News: Launch of Research Project into Youth Unemployment in Hastings

CXK, in partnership with East Sussex County Council and Hastings Borough Council, has launched a young-person-driven research project to identify and understand the factors contributing to the persistently high levels of NEET (Not in Education, Employment or Training) young people in...

Time: 10am - 1pm Venue: The Hub, MidKent College, Medway Road, Gillingham ME7 1FN   Are you a young person interested in apprenticeships Come along to our Apprenticeship Matching event to find out all about apprenticeships avaiable in Kent & Medway, and to meet with employers with...

Before the Kickstart programme I was working in my family’s café which was nice, but I wanted to be more than a waitress The skills I picked up from there were helpful, such as customer service skills and being confident whilst serving a customer, but I wanted more than that When I left my...