Around the World in 80 Careers: Tattoo Artist 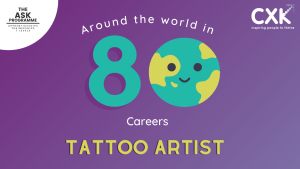 Waking up on the final night of their stay at the Carmel Bay View Inn, our adventurer felt refreshed and well rested after such a long leg of the journey. They finally felt adjusted to the mega 12 hour time difference! Being in a new country and city was such an exciting experience so far. He had managed to visit and see the spectacular views of the Pebble Beach Golf Course, and soaked up the warm Californian rays on the golden sands of Carmel Beach. The few days break was much need after such an exhausting journey.

The plan for the day, after checking out, was to head off early to central San Francisco as it was their dream to see the Golden Gate bridge which they read so much about in books and magazines. The drive up would be around 2 hours, which promised to be a scenic route along the Californian West Coast, according to Taylor, the friendly receptionist who checked them out of the hotel. She recommended a well-known rental car company and suggested a few must-see sights along the way.

Arriving in downtown San Franscico, our explorer parked up in a parking garage that promoted all day parking for $20. Not bad, considering they were in a prime location. They had only rented the car for part of the day and needed to get it back by 8pm. But being in a city, they didn’t mind giving up the car for some bicycle wheels. They had heard this was the best way to explore downtown and the Golden Gate bridge.

They grabbed a filling brunch of American style pancakes piled high with cream and tons of syrup, before hiring out a bike for the day to hopefully burn off all the calories they had just devoured. They meandered through the Golden Gate Park, eventually ending up at the bay to take in the spectacular views of the bridge. One of the most recognisable bridges in the world, the Golden Gate bridge was built in 1937, spanning one mile and attracting tens of millions of visitors each year. The red Art Deco design was really a sight to see, and the explorer took a moment to sit and enjoy the view.

Despite the large brunch, the explorer was starting to get peckish again, and decided to look for a nice place to eat dinner that evening. They asked a friendly man selling artwork on the street who suggested they check out the Hog Island Oyster Company by the ferry terminal, if they were interested in fine dining and fresh oysters. The explorer liked the sound of that and decided to head there right away.

On the way, they came across a brightly coloured store with a standout sign which caught their attention. It was a tattoo parlour called ‘Tattoo Boogaloo’. Intrigued, they peered through the window and marvelled at the colourful and stylish design of the shop, which had artwork that filled the walls from floor to ceiling. As a teenager, they had always liked the idea of getting a tattoo, but never found the confidence to do it. Who knows, maybe this trip could be a good opportunity!

They remembered that it is actually quite difficult becoming one, especially getting onto an apprenticeship to become a tattoo artist. They had heard that this type of apprenticeship was very elusive to come across and isn’t widely promoted. Out of curiosity, they decided to the go in and ask one of the tattoo artists who was busy at the back, but came out to greet him. The explorer found out the best way to become a tattoo artist is to create a portfolio of your work, and to start gaining connections in the industry. The tattoo artist joked about the horrendous tattoos she had from former colleagues starting out and practicing their skills on her. Upon researching further on their phone, the adventurer found out that you can work towards this role by doing a specialist course run by a private training provider, such as The Tattoo and Piercing Academy.

You can do an apprenticeship as a tattoo artist, but you will need to find a certified tattoo artist mentor who is willing to take you on as an apprentice, which can often be the hardest part! They also noted that Tattoo Apprenticeships are non-regulated, non-government funded work-based training pathways (with the health and hygiene and local council licence as being mandatory). They also remembered learning once that the short “Tattoo Academy” courses didn’t have a great reputation in the industry, with most studios preferring Tattoo Apprentices to take a journeyman approach. But despite the hurdles, this career route seemed like such an exciting one to take, and well worth the additional research and work.

After a long day of exploring the city, our explorer finally sat down at the restaurant, and rested their feet at an idyllic table outside, with a glorious view of the bay. If they looked to their far left, they could also make out the notable isle of Alcatraz! After ordering a cold IPA, our explorer pondered on their next destination. Their mind brought them back to the Big Apple and their dream of seeing the bright lights and the hustle and bustle of the melting pot city. They whipped out their phone and started browsing internal flights. They could smell the famous New York pizzas pies already…

If you are a teacher, you can request apprenticeship support for your school through https://www.apprenticeships.gov.uk/influencers

If you need support with looking for an apprenticeship or applying to college, speak to your careers adviser in school or college, or alternatively contact the National Careers Service helpline for support by telephone, email, post or online: https://nationalcareers.service.gov.uk/contact-us

Emily had been out of education since Year 7 due to experiencing severe bullying at her school An attempt was made to integrate Emily back into education previously but this fell through – due to these circumstances Emily was left with a negative view of education even though she loves...