Around the World in 80 Careers: Tour Guide 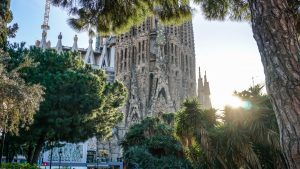 Still amazed by the kindness and knowledge of Adina the Hostel receptionist, our explorer made it swiftly and cheaply to Barcelona. Remembering her advice, they asked in arrivals if there was a shuttle bus from the airport and he was told about the Aerobus, which offers transfers to the city centre. They got the bus then headed to a hostel to rest for the night.

The next day, they set out towards the Eixample district, via the Metro, to visit the Sagrada Familia as they hadn’t been able to stop thinking about it since they had seen a photo of it back in Milan.

When they arrived and saw the basilica in person, it was even more impressive than they ever could have imagined. Not even the throngs of tourists or the ongoing construction could diminish its extraordinary architecture.

While the exterior was a sight to behold, with its intricate stonework and tall towers, our explorer found themself wanting to find out more about the building’s history. So, they decided to fork out for entry and a tour.

After some queuing, made bearable by the beautiful weather and view, they were joined with a small tour group. The tour guide was a charismatic, greying man called Néstor.

As they walked around the site, guided by Néstor, he told them lots of facts about the Basilica. One of them was that despite not being complete yet, that the building they were standing in had been designated as a UNESCO world heritage site!  The tour guide had no notepad or headphones, and our explorer was amazed at how many details he must have committed to memory in order to be a good presenter and leader.

When the time came for asking questions, they asked Néstor just how long the basilica had been under development. The guide, without hesitation, explained that its construction started in 1882, during the festival of St. Joseph, and isn’t predicted to be complete until 2026!

Our explorer had a blast on the tour and felt like they probably wouldn’t get striking images of the columns, stained glass and the soldier with six toes that Néstor gleefully showed the group out of his head for a long, long time…

Find out more info on what it takes and how to become a tour guide here: