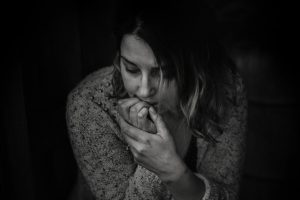 We may all know someone who fiddles, twiddles, picks, pops or nibbles at parts of their body. It could be thumb sucking, nail biting or knuckle cracking for example, which are all fairly common human behaviours, usually of no great obvious concern. But what if these behaviours do become more frequent, severe and uncontrollable? What if someone bites their nails so often that they bleed and become infected or pulls and fiddles with their hair so much that they develop areas of baldness? Possibly someone might pick at their skin so frequently, causing sore lesions and lasting scars. In which case we may be dealing with what is known as a body-focused repetitive behaviour or BFRB for short. Body-focused repetitive behaviour is a general term referring to a group of complex disorders whereby individuals compulsively pick, pull and bite at parts of their bodies, despite often wanting to stop and the consequences can be devastating for sufferers. The 1st October marks the start of the BFRB Awareness week hosted by The TLC Foundation for Body-Focused Repetitive Behaviours (bfrb.org) and so what better opportunity to introduce and bring into the light some of these often-unknown disorders and give an overview of how individuals might begin to intervene with these urges.

As many as 1 in 20 people experience BFRBs and yet despite its prevalence, it is not a particularly well-known condition, possibly because many behaviours may be dismissed as bad habits and kept secret from others. Some of the most common BFRBs are compulsive hair pulling (trichotillomania), skin picking (dermatillomania or excoriation), nail biting (onychophagia) and others such lip or cheek biting, skin or hair eating (dermatophagia and trichophagia), thumb sucking, teeth grinding (bruxism), knuckle cracking and nose picking (rhinotillexomania). It is not entirely clear why people develop these compulsive behaviours, which often emerge around adolescence, although there have been studies to demonstrate links between our emotional and physiological states, levels of stimulation and some habitual reinforcement. In the Diagnostic and Statistical Manual of Mental Disorders (DSM-5), BFRBs are classified under ‘Obsessive-compulsive and Related disorders.’ Although they share some similarities with OCD there are also some clear differences. Namely that individuals who engage in BFRBs do not usually experience obsessional thoughts and will often pull or pick to incite feelings of pleasure, relaxation or stimulation, rather than to avoid negative feelings or consequences. These behaviours may also share some physical similarities to self-harm, although again motivation is often a little different here, as the harm is an unfortunate consequence of the behaviour rather than the goal. However, BFRBs are often, although not always, present together with other disorders such as OCD, ASD, Tourette’s depression and anxiety and an individual’s self-esteem may be so greatly impacted by the behaviour such that feelings of low self-worth and shame may arise, which might contribute to self-harming behaviour alongside the BFRB.

BFRBs often cause some physical damage, whether that be hair loss or breakage, skin wounds, sores and scarring, infections, pain and inflammation. However, the effect of BFRBs are more than just the direct physical damage to hair and skin. Sufferers might develop other associated medical issues such as repetitive strain injuries and digestive problems, if hair or skin is ingested. The BFRB may also increase feelings of anxiety, hopelessness and depression, stress, shame and embarrassment which may result in a feedback loop whereby the cycle of behaviour is perpetuated, particularly if the BFRB is triggered by emotional states. Embarrassment about how skin or hair looks may result in avoidance of certain activities such as sports, haircuts and massage, avoidance of wearing certain clothes which expose the damage or wearing hair or clothes in particular styles to conceal bald patches or lesions. Embarrassment may also interfere with social intimacy, whereby people with BFRBs take steps to prevent people getting too close for fear of others seeing the results of their behaviours. Sufferers can also lose a lot of time spent in episodes of pulling and picking as well as time spent hiding the effects of their actions. This multidimensional or heterogeneous nature of body focused repetitive behaviours illustrates how complex, diverse and consuming these disorders can be.

The causes of BFRBs are not exactly known but there are numerous theories that present perspectives that may help to understand this phenomenon. An ethological approach compares BFRBs with the grooming behaviours seen in animals; particularly when these behaviours become maladaptive as we may see in birds who overpluck their feathers, dogs who lick paws until sore and cats who overgroom their fur, leaving hair thin or bald. In all of these conditions, overgrooming may be a self-regulating response to over and under-stimulation and this idea extends to humans too. For example, if feeling stressed, excited and hypersensitive to the environment and others, a BFRB may help to sooth and calm or if under-stimulated such as when inactive and feeling bored, the repetitive behaviour may offer stimulation and a return to homeostasis. It may also be that BFRBs offer a self-regulating pathway for easing uncomfortable emotional states such as anxiety and low mood and they also can function solely as pleasurable and relaxing, which then through reinforcement and repetition, become habitual. Whatever our trigger, our bodies provide a convenient multi-sensory apparatus, covered in nerve endings, accessible to us wherever we are, with which we can instantly and fairly privately self-regulate. Some people are aware when they are engaging in the picking and pulling but for some people the behaviour is unconscious and automatic and they do not realise until they see the damage. This combination of habit, pleasure, self-regulation and unconscious engagement, make it particularly difficult to treat but fortunately not impossible.

There is no one clear route for treatment of BFRBs but rather multiple pathways which may offer relief for some individuals. Some of the most effective methods of treatment, are in the form of cognitive-behavioural therapies (CBT) such as Habit Reversal Training (HRT) and the Comprehensive Behavioural Model (ComB). Through these models, individuals are encouraged to build a personal profile which breaks down and considers the sensory, cognitive, emotional, motor and environmental components of their behaviour and then prompted to experiment with altering and interrupting their usual sequences. For example, if the hair pulling provides a particular sensory need, then finding alternative sources of sensory stimulation can be helpful, through the use of fidget toys and other objects or activities which offer desirable sensory feedback. If someone notices their skin picking increases when they are stressed or bored, then exploring ways to relax or keep busy can be helpful. Changing routines or implementing ways to block the behaviour can also help limit the opportunity to pick or pull, so we might not sit in certain chairs or we could wear plasters on fingers or wear a hat to prevent hair pulling. Challenging some of our beliefs and what we might tell ourselves which might be reinforcing the behaviour, can offer an additional layer of adjustment, for example, replacing beliefs such as “I need to remove this skin/hair to make good of the area” with “my skin/hair cannot heal/grow back unless I leave it alone.” For many people the repetition of the behaviour may have also formed a habit, further reinforcing the behaviour. Once we have learned something it is not easy to unlearn it but what we can do is inhibitory learning, when we deliberately implement and learn alternative ways of doing things which when repeated, eventually become more dominant and automatic than old behaviours. As new habits are formed, incompatible with old behaviours, the original habit is less frequently repeated and without this maintenance, loses its momentum.

This is no quick fix however and sufferers will need to be prepared for this. As with learning anything new, at first the experience is methodical, clunky and exhausting as we consciously and deliberately take our first steps for learning and change. Take the example of learning a new instrument; at first, we may feel that our fingers do not stretch and contort as we need them to play the keys, strings or finger holes but with regular and continual practice, the new skill becomes burnt into our automatic circuitry and playing feels more effortless and instinctual. The difference here is that unlike with learning a new instrument, we are not drafting these new behaviours on a blank sheet but rather overlaying very prominent existing behaviours. Therefore, embarking on this piece of work will require motivation, patience and resilience to push through the inevitable impasse, fatigue, blips and relapses. It can be helpful to spend a bit of time solidifying personal reasons for change; the gains and the desired losses, gathering stimuli to anchor your mindset with reminders and belief enhancers such as affirmations, quotes, mood boards, employing contingency management in the form of rewards to positively reinforce desired behaviour change and recruiting in people; be it friend, family or professionals to bolster morale and keep you focused.

More information on BFRBs and pathways for support can be found on the TLC Foundation website bfrb.org

Other Articles You May find Useful

The National Careers Service South East has announced that it will host a live, interactive webinar to support unemployed graduates to boost their job search, access graduate employers and ignite their careersHosted in partnership with The Association of Graduate Career Advisory Services...