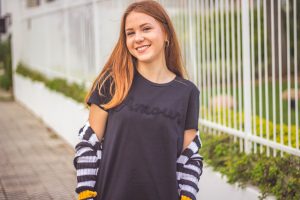 Before joining Launch Pad, Lacey, 25, had never had a job due to anxiety and depression, factors which, when combined with the responsibilities she had at home as a young carer, had really been holding her back. Lacey’s goals on joining Launch Pad were “to build up more confidence to overcome my anxiety and get into work”.

After several meetings with her mentor, Lacey identified that she would like to gain part-time work close to home, and soon enough, Lacey and her mentor found opportunities for employment at the Royal Mail in their Strood warehouse, a role which ticked all of Lacey’s boxes – it was a 10-minute walk from where she lived, it would keep her busy and there was a variety of shifts to choose from. Lacey attended a recruitment day at Chatham Job Centre where staff assisted her to make the application and a few days later she found out that she had been successful.

Lacey has told her mentor that she feels excited and nervous about starting her first job, commenting that “my friends and family say they are so proud, that I’ve come so far and done so well and it’s made me realise how proud I should be of myself. It was great to know that I had someone to turn to and my mentor always put my mind at rest when I was panicking”.

Lacey has also benefited from the close working relationship that the Launch Pad project has developed with the local Jobcentre Plus, with regard to concerns she had about her benefit entitlements. Lacey told her mentor that having the opportunity to discuss this took a “weight off my mind and reduced my anxiety about starting work. I was also able to buy appropriate work clothing through the bursary. I need to say a big thank you to Launch Pad for always being supportive because without it, this wouldn’t have happened.”

Have you thought about a career in the Public Sector Get started in a new career by joining our 4-day Public Sector Work Academy Dates: Monday 9th November - Thursday 12th November Time: 10am-12pm dailySpeak to employersFind out about a range of vacancies now available across the...

I moved to London to study modern languages in 1994 and, on graduation, started a career in TV broadcasting After over 15 years working for different TV channels (MTV, Discovery Channel, Disney) I decided to take a break and I travelled for a year On returning I found that the TV landscape had...