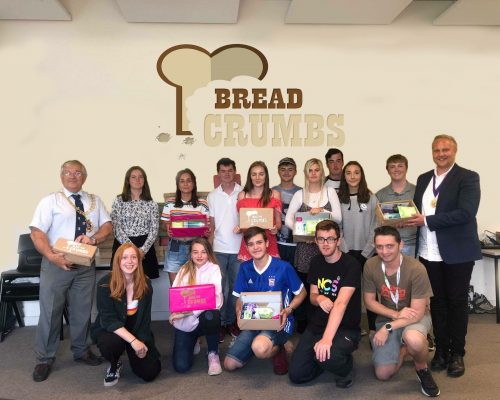 A group of 15- to 17-year-olds from Hastings spent four weeks over the summer holidays designing and delivering a social action project that provided much-needed items to disadvantaged young people. Calling their venture ‘The Breadcrumbs Project’, the 13 young people worked together to create care packages; which they distributed to disadvantaged peers through local young people’s centre, Xtrax.

The young people developed the social action project through participating in the National Citizen Service (NCS) programme. The programme was being delivered in Hastings by CXK.

The group were motivated to help their peers after learning that a third of children in Hastings are classed as underprivileged.

Prior to creating their project, the team spent a week at an outdoor activity centre; taking part in a range activities designed to promote confidence and team-building skills, such as raft building and climbing activities.

“The team benefitted from wellbeing activities”

During the second week, the participants spent a week living in halls of residence at the University of Sussex,. There, they had the opportunity to build life skills such as cooking and budgeting, and benefitted from wellbeing activities. During their time at the university, the young people had the chance to consider the issues facing their community and pose questions to local political figures and MPs. It was as a result of a debate about the ‘Tampon Tax’ that the team’s social action idea was developed.

Returning to their local community, the young people were able to put the skills they had learned into action. They raised the money to fund the care packages through the organisation of a sponsored walk, and the creation of their own website and crowdfunding page. The team promoted their project via social media channels, and interviews with local newspapers and radio stations. The young people reached out to local community figures such as the Mayor of Hastings, and local MP Amber Rudd; who showed their support on social media and by visiting the project in action.

The team went on to create 40 care packages for their underprivileged peers; packages containing items often missed out by food banks. Those items included sanitary towels, hair and hygiene products, deodorant and skincare; to help the recipient feel more confident and empowered.

The project took place over the course of two weeks. During that time the young people took ownership and agreed roles and responsibilities based on their own talents. The team devised their own business plan, which they presented to a panel of local business people at a ‘Dragons Den’ style event, before setting the project in motion.

The group now plans to expand their project to include school supplies, first aid and practical household items. They are also planning to produce a further 40 care boxes by the end of the year. The group also plans to diversify to offer CV writing workshops, and will continue its fundraising activity to fund day trips for disadvantaged Hastings young people.

Team member Benjamin Davis, 16, from Hastings, said; “We’d all seen or experienced poverty and knew it was a huge issue in Hastings. But we were shocked to learn that one third of Hastings children are considered to be disadvantaged.

“Schools and colleges will help by giving free meals, but that’s where it ends. There’s no enrichment and there are many items that young people in our area have to go without; items which most of us take for granted and consider to be necessities. We decided we had to do something about it.

“Someone in our group knew of Xtrax, a centre which provides support for disadvantaged local young people. We went in, had a meeting with them and they agreed to support us by distributing the care packages. The project was a massive success and it was amazing to be able to help so many of our peers.

“I’ve always wanted to do something like this, and NCS helped to bring me together with like-minded young people who also wanted to make a difference. We’re really excited to continue The Breadcrumbs Project beyond NCS, and continue making a difference to those that really need it.”