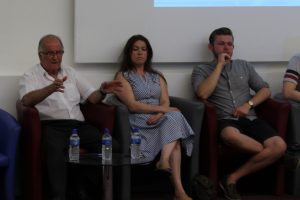 On Tuesday 7th August Sir Roger Gale, MP for North Thanet, joined a panel of community and political experts at a YouthQuake event designed to increase the political awareness of a group of 200 young people taking part in the National Citizen Service (NCS) programme.

Held at the University of Kent, the event was designed to allow the teens pose questions to the panel, and discuss with them the political and community issues that matter to them most.  The young people attending were all aged 15-17 and from across the Ashford, Canterbury, Dover, Thanet and Folkestone areas. Panel members included Sir Roger Gale MP, Dr Laura Sudulich, senior lecturer in Politics at the University of Kent, councillors from across the Ashford, Canterbury, Thanet and Dover areas including Canterbury City councillor Amy Baker and Cllr Brad Bradford, cabinet member for Community Safety and Wellbeing at Ashford Borough Council, and Deputy Chairman for Membership at North Thanet Conservatives, George Kup.

Delivered in south and east Kent by CXK, NCS is an open-to-all unifying experience shared by teens from different backgrounds which helps them become better individuals, and in turn better citizens.

NCS participants were in their second week of the programme where the young people live away from home in university-style accommodation whilst learning a range of new skills – from budgeting and cooking through to African drumming – while also exploring a range of political and local community issues. The young people, who had been exploring the issues facing their local communities as well as broader political topics, approached the panel with questions about hospital plans for east Kent, the cost of housing, Brexit negotiations, and the changing face of education.

Sir Roger Gale MP learned first-hand how NCS – the fastest growing youth movement in our country for a century – is helping to develop participants’ political and community engagement. Sir Roger said: “Young people are always and rightly challenging and are good at making politicians think! This was a stimulating exchange of views that I really enjoyed.”

Grace, 16 and from Ashford, commented on her experience of the event: “I really liked that we were not only able to pre-plan the questions we asked of the panel, but also that we could ask questions freely in response to their answers, as it meant we could get multiple points across. There was loads of diversity of opinion and it gave us the opportunity to break down stigmas.”

NCS is a flagship government initiative that provides young people aged 15-17 with the chance to take on new challenges, experience exciting activities, make long-lasting friendships and develop vital skills that will support them later in life. It was launched to tackle three core issues of importance to society: social cohesion, social mobility and social engagement.

Over 400,000 young people have completed the NCS programme to date, giving up an incredible 11.7 million hours to social action projects since NCS started.