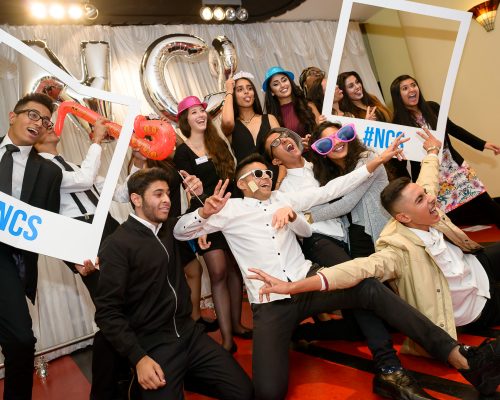 A night of celebration was held on Thursday 29th November at Dreamland, Margate; marking the successful graduation of 40 young people from the National Citizen Service programme.

The four-week programme is aimed at increasing social responsibility and skills. During that time the teens, all from the Thanet, Ashford and Canterbury areas, collectively volunteered 2,200 hours to social action projects to benefit their local communities.

Delivered in south and east Kent by CXK, the National Citizen Service (NCS) programme is a once in a lifetime opportunity for 15-17 year olds to make a lasting mark in their local communities, whilst learning first-hand the skills that employers are really looking for. The programme also offered the participating young people the opportunity to try their hand at various activities. These ranged from rock climbing to raft building to developing confidence, business, social and team-working skills.

Having fun is a huge element of the programme. However the young people have also made an enormous contribution to their local communities. The Thanet team helped renovate the premises of new venture, The Kitchen Community Café in Margate; an organisation committed to working to reduce food poverty by offering affordable food to the local community.

The Ashford group, meanwhile, organised a variety of fundraising events to raise funds for Alopecia UK. These  included three team members cutting or shaving their hair for donations, raising £1400 in the process. They went on to deliver a series of school assemblies to raise awareness of the condition.

“You have contributed to over 5 million hours of voluntary action”

Finally, the Canterbury team chose to support local homeless charity Catching Lives. The team raised donations for the charity by doing bag packing and bucket collecting at Wilkinson’s in Canterbury high street. They also collected unwanted winter clothing from family and friends to donate to the charity.

At the ceremony, graduates received a certificate signed by the Prime Minister, and heard from NCS Assistant Director, Kellie Major.

Kellie commented on the team’s success in the programme. She said,  “You now join over 400,000 other young people that have completed the NCS programme, and together have contributed over 5 million hours of voluntary action.

“NCS isn’t just about young people having a fantastic time and letting off steam, as important as that is. It’s about bringing young people together from a range of backgrounds, developing skills, challenging perspectives, and changing society for the better. If I could summarise NCS in one word, it’s about responsibility – our young people learn responsibility to themselves and to the communities around them.”

The National Careers Service has identified an opportunity to ensure citizens are receiving crucial careers support by advertising vacancies and careers advice during the current Covid-19 outbreak This will be done by launching the Virtual Jobs Fair campaign on Monday 4th MayThose who are out...

I was in a situation where I wanted to change jobs I was working nights in a care home and wasn’t sure what I wanted to do, but I knew that the fact that I didn’t have a minimum of Level 4 (Grade C) at GCSE in Maths would make it difficult for me to change jobs So I got in contact with CXK as I...